How much do you trust me? Because I found this book delightfully enjoyable, and I think you would too. 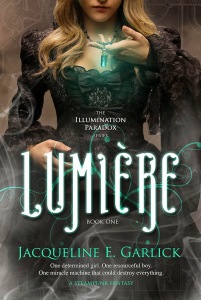 Netgalley was so kind as to supply me with an ebook of Lumière, and I have to say that I was pleasantly surprised to find this book so engaging.
Eyelet Elsworth is a young lady who suffers from something which is criminal in her world: madness. She lost her father many years ago, after he failed to cure her with his invention, The Illuminator. When Eyelet unexpectedly loses her mother, she flees the city and is pursued. As she flees, she stumbles upon the invention that her father sold all those years ago, and clings on to it when she sees it being stolen. Thus she catapults herself into Urlick’s life as he flees through the Vapour ridden forest to his hide-out. Urlick bears his own burdens, including one that is much more visible than Eyelet’s seizures: He is an albino who also bears a significant birthmark on his face. These two characters, one marred on the inside, the other on the outside, form an unlikely pair, but provide the reader with a predictable, yet far from disappointing, romance. As the story advances, the two characters learn to trust each other and join forces in their search for a way to cure themselves of their burdens.
While there were certain aspects of the book that I thought could have been done better (Eyelet’s grief and hatred over her parents’ death, and the sexual attraction between the two MCs), I overall found the read fast paced and well plotted. There is a cast of likable minor characters, as well as formidable foes, but the characters were a little bit cut and dry, evil or good. Personally I prefer characters who are a little more ambiguous.
I wasn’t expecting the steampunk genre, for it didn’t seem to come up in the book description I read, but it felt an almost natural expansion of the story. The setting was used well, with unique places and ideas, such as the Embers and the Vapors. All of these were not just strange things, but places and things which factored directly into the plot in a concrete, terrifying, and masterful way.
Garlick is a pro at shaping her world and using it to advance the plot, as well as using nearly every character she introduces for important purposes. Although the MC Eyelet can be a little annoying at times, and perhaps a little weak, she does come through as a strong female character, one who is determined to get her way. She and Urlick combine to create a likable force to be reckoned with, two people that are stronger together rather than apart.
Rating: 4/5 stars

I'm grateful to have chosen indie publishing right now.⁠ -⁠ Had I sought and accepted a traditional publishing deal for the Canens Chronicles, I would most likely not be able to change the next book's plot at this point.⁠ -⁠ Being "indie" means I get to write what I want, when I want. ;-) ⁠ -⁠ P.S. it also means getting to put your books on sale when you want—and both of the Canens Chronicles books are on sale for just a couple more days! Check them out wherever you buy books.⁠ -⁠ ❅ ❅ ❅ ❅ ❅⁠ #amwriting #writing #writethatnovel #author #authors #authorsofinstagram #authorblogs #igauthors #writingcommunity #momswhowrite #fiction #justkeepwriting #keepwriting #writeeveryday #wip #workinprogress #novelinprogress #novel #writingiswork
Did you know that Fog & Mist got an honorable mention from Writer's Digest for the 2019 Indie Author awards? ⁠(Probably not, because I don't think it's been formally announced yet.) 😂⁠ -⁠ Anyway...right now both Fog & Mist and Fire & Frost are on sale!⁠ -⁠ Head to Amazon (or your ebook retailer of choice) for your discounted copies today. :)⁠ -⁠ #onsale #ebooks #fairytaleretelling #cinderella #snowwhite #fairytales #fantasy #youngadult #fiction #writersdigestawards #books #bookstagram #reader #reading #amreading #readingcommunity #nevertoomanybooks

On The Written Word Remains