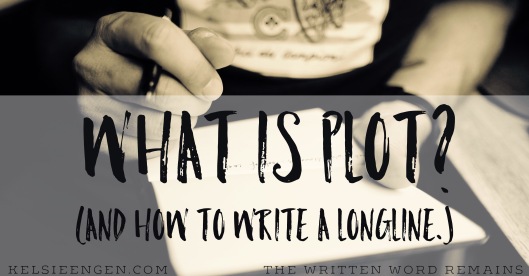 It’s the stuff of nightmares.

Your friend approaches you, says, “So I heard you’re a writer now. What’s your story about?”

What is your story about? You stammer out some reply. “Oh, it’s about this girl who doesn’t get along with her mom.”

Yeah. That didn’t really give you any idea about what my story is about, did it?

In a nutshell, plot is what you’d say to someone when they ask “What is your story about?” This could also be considered  your logline.

But how do you figure out what plot is?

Especially when you’re looking at your own WIP, plot isn’t so easy anymore. But it’s vital to your story–even a first draft, although it may suffer from identity crises of multiple varieties, plot shouldn’t be (but often can be) one of them.

So how do you figure out what plot is? Plot seems so straight forward, doesn’t it?

Until you go and try to figure out the plot of your own story. Then there’s a lot of hemming and hawing and indecision and confusion.

Plot. It’s the bane of every writer’s existence, right? Because until you have a plot, you have nothing else.

So in talking revision, it’s important to discuss and understand what plot is. There are many misconceptions about plot, and a lot of literary fiction books are accused of not having a plot at all because of their slow(er) pace.

But plot is not only found in action packed thrillers or YA dystopians. Plot can be a creature slow and gentle, even-tempered without huge outbursts. The climax may be the character realizing their way of life is not worth pursuing.

So what is plot?

In a nutshell, plot is what happens in a story.

If “nothing” happens, then the book is boring and plotless, right?

Well, hold on. How do you define nothing?

A thriller plot looks a lot different from a literary fiction plot, or even a mystery plot.

But a lot can happen without someone saving the world. A character could discover that her mother lied to her her entire life. The climax could involve her forgiving her mother.

A woman could meet a man and fall in love. The climax is her declaring her love to her chosen mate.

Or a teenage girl could discover that the boy she goes to school with is a vampire, a discovery that threatens her life.

Plots really aren’t that varied, when you get down to it, and there have been a lot of books written declaring a finite number of plots. Check out books like 20 Master Plots and How to Build Them, 9 Master Plots for Bestsellers & Blockbusters, or The Seven Basic Plots: Why We Tell Stories. (There are probably many more books out there on the subject, but these are a good smattering.)

How do you determine the plot of your own story?

This one’s a bit trickier, even though it may seem not to be on the surface.

One of the hardest things for a writer to do with their own work tends to be to boil down their story in a nutshell. But when you have to explain your work to someone else, what do you say?

Chances are, whatever you say is part of your plot.

But to really figure it out, there are a few formulas you can use to describe it. Here is a good one:

In a (SETTING) a (PROTAGONIST) has a (PROBLEM) (caused by an ANTAGONIST) and (faces CONFLICT) as they try to (achieve a GOAL). Source

A plot is a series of events

What are the major events in Snow White?

1. The Queen is told she is no longer the most beautiful woman in the land.

2. Queen instructs the Huntsman to kill Snow White, but he fails to do so.

4. Queen tries to kill Snow White with a corset.

5. Queen tries to kill Snow White with a comb.

6. Queen tries to kill Snow White with an apple.

7. Snow White awoken by the Prince.

8. Snow White marries the Prince, and the Queen attends the wedding.

9. The Queen is made to dance in the red-hot slippers until she dies.

Which numbers do not pertain to plot?

Feel like this is a trick question? Well, maybe.

(Answer: 3 & 8) Basically what happens in Snow White is that the Queen is jealous of her step-daughter and tries to kill her so that the Queen can remain the most beautiful woman in the land.

Everything else is superfluous to the plot. The romance is a subplot, and the dwarves are supporting characters that don’t prevent the Queen’s attempts or rescue Snow White. In other words, the Queen isn’t trying to kill Snow White because she met the Dwarves. No, that ball is already rolling. That’s not to say that their presences aren’t important to the story, but their presence doesn’t exactly interfere with the plot itself. Confused?

Inciting Event: The Queen’s mirror tells her that she is no longer the most beautiful in the land. Instead her step-daughter Snow White has taken that title from her, and she’s a mere child. The Queen is livid and…

Pinch Point 1: The Queen finds out that Snow White lives and sets out to kill her with a corset.

Midpoint: The Queen tries to kill Snow White with a comb.

Pinch Point 2: Undeterred from her prior two failures, the Queen returns to try and kill Snow White with an apple.

Turning Point 2: After many years, the Prince arrives and finds Snow White in a glass coffin, unaged from the time of her “death.” Falling instantly in love with her, he buys the coffin and Snow White from the Dwarves and begins to move her, during which a servant stumbles and dislodges the apple from her throat. She’s alive!

Climax: Snow White and the Prince are in love, and they schedule their wedding.

Resolution: The Queen is punished by being forced to dance in red-hot slippers until she dies. Snow White and the Prince live happily ever after.

So the plot is that the Queen tries to kill Snow White. Okay. So number 2, Snow White meeting the 7 Dwarves has nothing to do with the Queen trying to kill SW. None. Take out the Dwarves and Snow White would still be a target.

(That’s not to say that these characters don’t affect plot, per se, but they aren’t absolutely necessary to the plot. As opposed to the Queen, who, if she were removed from the story, there would be no story.) Number 7 is the same. Who cares if Snow White marries the Prince? In terms of plot, that doesn’t matter.

So if we were to write a logline for Snow White, it might read something like this:

In a country far away, a young girl named Snow White is being pursued by her stepmother, who is determined to kill her at all costs.

Once upon a time, the most beautiful girl in the world tries to hide from her stepmother, who is so jealous of her beauty that she wants her stepdaughter dead.

Note that neither of these follow the logline recommendation exactly, but that’s okay. The question to ask is whether it’s one sentence, and hits all the main points: setting, protagonist, problem, antagonist, conflict, and goal.

Setting: far away/once upon a time

Why is plot so important?

Plot is what drives your story. In order to write a solid story, you must have a solid plot.

So during your revisions, revisit your logline. If you haven’t written a logline before, write one now. Streamline your plot. What is your story about? What is the conflict, who is the antagonist? What is the protagonist’s goal?

Here are a couple of sources from K.M. Weiland’s site: story concept, 6 reasons for writing a premise sentence that discuss the importance of knowing your story’s concept. They will help you in figuring out your own story as well.

Tell me: do you use loglines in your revision? How do you craft them?

On The Written Word Remains